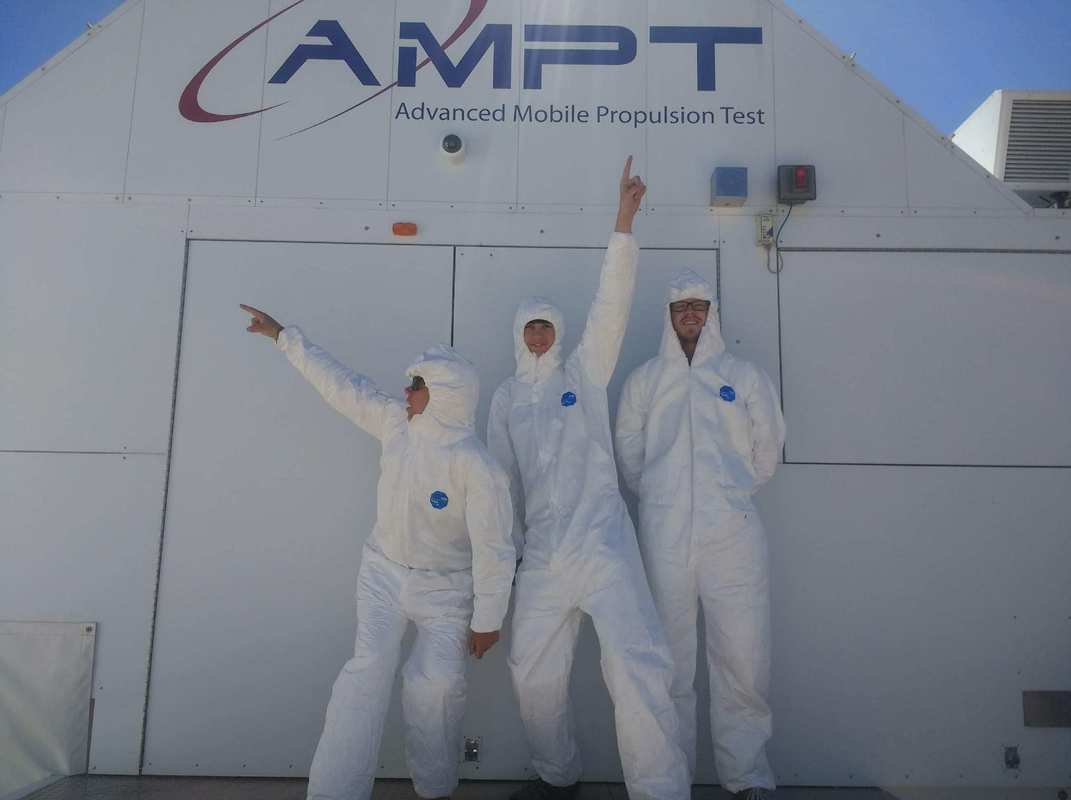 The LINK Internship is a three week internship required to complete junior year. The internship spans the time period between April 30th and May 18th, where for the other classes school continues on as normal but juniors are off experiencing the workforce. Juniors are required to wright their own cover letters and resumes and for the most part find a mentor and internship on their own. During the internship students spend 30-40 hours each week working with their mentor as well as completing a project.

I interned with DR.Billy Nollet in his lab at Fort Lewis College, a collage in Durango, Colorado. The collage has recently finished a new engineering building that they filed with instruments and resources for research, because of this many professors are starting research that will continue for many years. Two research projects that were being worked on in the lab that I was working in were research on the energy density of porous silicon and a magnet pump for liquid sodium.

​While looking for an internship I knew what I wanted to experience. I have two big interests for future pursuits in education, Aerospace engineering, and Astrophysics, so I wanted to find an internship in one of those areas to confirm my interest. I started off emailing candidates for an astrophysics internship like a family friend at the University of Arizona or people at the Kitt Peak Observatory. After those emails I started emailing, and calling when possible, people at aerospace companies in cities that I had a place to stay. There was one aerospace company in Durango, Advanced Mobile Propulsion Test (AMPT) after they responded denying me an internship, one of their employees that was a professor offered me an internship in his lab, which I accepted. The biggest challenge finding an internship was finding the best way to contact the right people. For most of the companies that I was trying to get an internship at the only email, I could find was a “catch-all” which obviously almost never get checked, and very few companies had phone numbers to call or employee email addresses listed on their website. There were only ten people who I got emails back from. Another problem that narrowed my search for an internship down to one person was that most of the internships required more than a three week period of time for the internship. The field of engineering requires lots of background knowledge specific to what you are designing. Because I don't have any degrees, it could take three weeks just to train me for what I would be doing. I hope that I will not only learn about the process that engineers go through but plenty of information on the inner workings of the project that I will be helping with. Though I have been told that the experiment that I will be connecting the chiller to had to do with a new generation of nuclear power plants, that is all I know. I really hope I learn the significance of liquid sodium in a nuclear reactor. At my internship I will try my hardest to contribute unique ideas. I know that I am in no facet more experienced than anybody who will be in that lab, but I can still be creative. Even an inexperienced mind can add on to and help refine the Ideas that are being discussed.​ 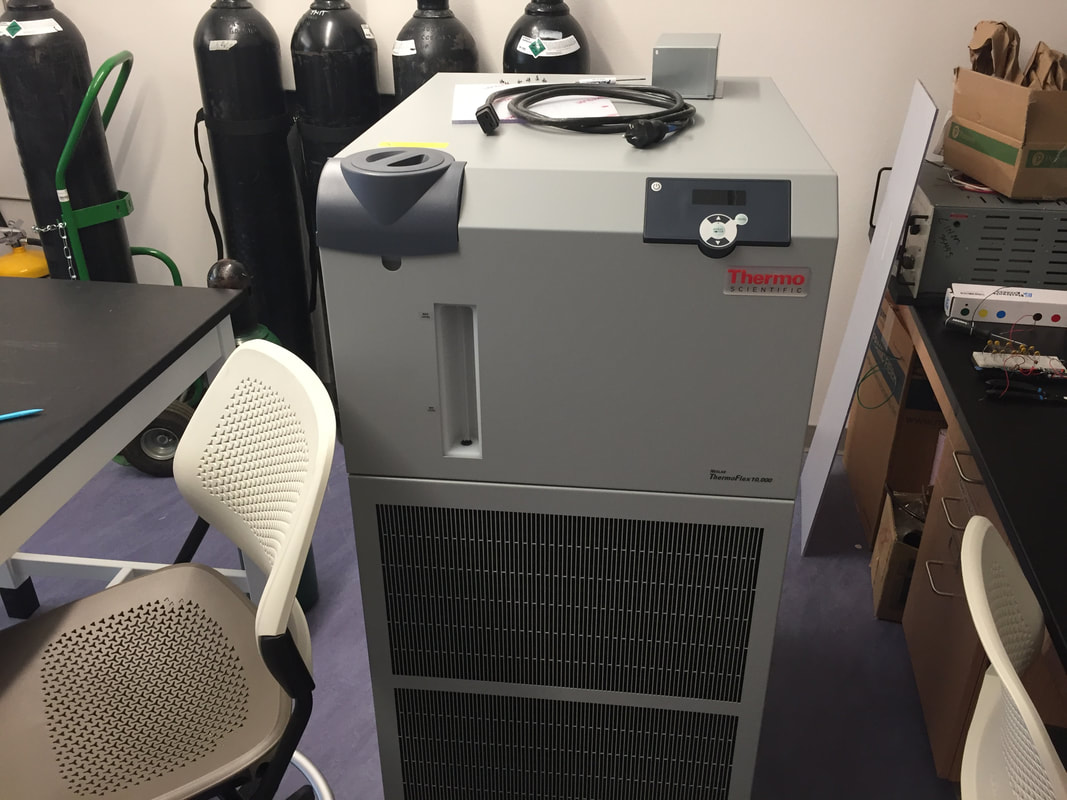 For my project I was tasked with setting up a recirculateing chiller, shown above, to cool an exparament across the room. A recerculateing chiller regulates the temperature of the working fluid, in our case water, and pumps it off to the application. I had to design and build pipeing from the chiller to the exparament and wire the chiller to an outlet. The chiller had been bought with all of the other origanal eqipment for the building, but had sat in storage for a couple of years before the professor who wanted it was found. Because it was stored for so long, it was missing a manuel and a filter this ment that I had to find the manuel online and find a place where I could buy a replacement chiller.

Luckily coming into my LINK internship I was pretty well set up to finish my project. I had already had plenty of experience doing research, reading manuals and contacting companies, from working on the solar car. I also had just recently been using the same pressure loss calculations I had to use when designing the tubing for my chemistry of food project. Even though the job had some familiarities, the general skills I learned through project-based learning helped the most. One of such skills was design thinking which I learned lots about in Cyle Tally’s class this year. While designing the tubing for the chiller, I asked Dr.Nollet how I could make the design better to use, and he suggested adding drain ports so that we could drain the tube before working on it. Another way I changes the design was to simplify fabrication. I changes the design so that we only needed to bend ⅜ inch tube instead of having to bend ¾ inch tube as well because we didn't have a pipe bender that big. But, more important than the skills I already knew were the skills that I learned while at my internship.
I learned plenty of new things while at my internship. I learned about the difference between a tube and a pipe, about programming Labview, about nuclear power plants, and about compression tube fittings. Along with the many specific skills I learned, I learned a couple of broad ones. One such skill was documentation. My mentor had me create schematics and price sheets similar to his college interns doing research. I learned about the programs and format used for schematics and learned how to create a professional looking price sheet. My mentor not only taught me the value of these documents to someone who works on the system in the future, but also to grant givers and investors who want to make sure you know what you will to buy with their money. Some of these new skills weren't taught to me, I learned them through mistakes. Because most of the time my mentor was unavailable to answer all of my questions, I had to learn on my own. I learned that you have to wrap plumber's tape around the threads of a fitting after I didn’t, and got one of the fittings stuck. I learned most of what I know about LabView by reading the error box after I had connected something wrong. When engineering making mistakes is how I learn best, but you do need to make sure that they are not too expensive. Luckily mistakes are worked into the budget and my mentor was okay with it as long as I didn’t make that mistake again.
At my internship, I made a difference to what was happening at the lab. I would talk to the professors about the problems they were trying to solve and at times they would actually heed my advice. An excellent example of one of these situations is a conversation I had between Dr.jessing and Cody. They were discussing the best way to find the temperature change from a detonation, in a calorimeter, in a data set. The problem was that the fluctuations in temperature from water moving inside the calorimeter were greater than the predicted temperature change of the detonation. During their discussion I suggested that the best way to see the change in the data set would be if you increased the temperature change or “made a bigger boom.” In the next few days they did just that by increasing the sample size significantly. My project will also be put to use in the near future being used to cool computers and permanent magnets that can’t get very hot. Even though I didn't finish the coolant circuit Dr.Nollet offered to continue my internship into the summer to finish it and do more.
This internship went exactly how I wanted it to and confirmed my interest in engineering. My mentor also Helped give me an Idea of the steps it took him to work in, and research the field of propulsion. He recommended that I would do best at a college that focuses on undergraduates only to get an undergraduate degree. He said that after getting my undergrad I should go to a big research college to have the opportunity to do cutting-edge research of my own and I agree with him. Even though the internship only confirmed what I was already interested in it’s a relief to know that college will be what I want it to be.